Red Quinoa is an amazing grain. For those of you not familiar with it’s amazing-ness yet, be sure to check out the meet whole foods post all about it. I had someone ask me the other day how it’s pronounced because it’s spelled so funny. She said she was confused and had been saying it “kin-NO-ah” or something. The real way to pronounce it is “KEEN-wah”. So there you go; now you’ll know how to read this post. 🙂

One of the things I love about the red quinoa is it’s beautiful color. It’s just the perfect color to add to dishes with ground beef. I usually adapt recipes that call for ground beef by cutting the meat in at least half and substituting about 1/2 cup of uncooked red quinoa, cooked for every pound of ground beef. I’ve found that my family still likes the beefy flavor so we do best when I substitute part of the meat in these kinds of dishes rather than omitting it entirely.

Here’s one of our favorite dishes with red quinoa that we make a lot. I usually serve it over mashed potatoes. Actually in this picture I served it over a potato/turnip mash (I had just harvested a lot of turnips at the time…). Healthy and delicious. 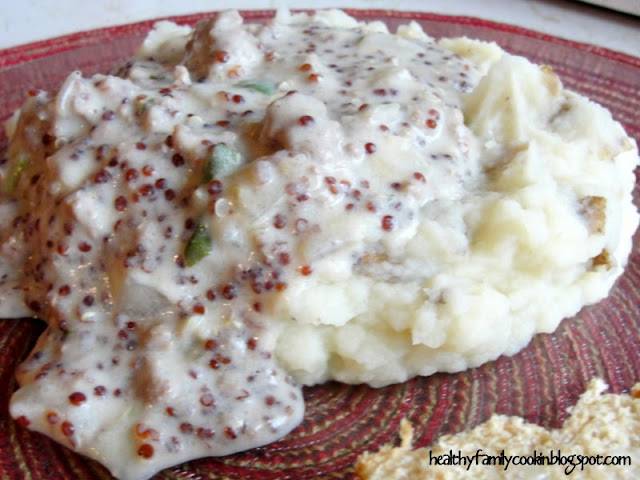 Red Quinoa Beef Stroganoff
1/2 tsp. dried basil (or 1/8 Cup fresh basil, chopped)
Serve over cooked egg noodles, mashed or baked potatoes
While the quinoa is cooking, melt the butter in a large skillet
over medium heat. Add the onion and stir until soft. Add the ground beef and
cook and stir until browned. Once the quinoa is cooked it can also be added to
the skillet at this point (or later if it still needs a bit more time to cook).
Add the broth, salt, nutmeg, basil, and pepper to the skillet. Bring to a boil
and immediately decrease the heat to low. Simmer until all but 1/4 Cup liquid
remains, about 30-40 minutes. If you’re in a hurry, you can cook this a little
faster on medium heat, just watch it close and stir often. In a small bowl
whisk together the milk and flour until mostly smooth. Then add to the skillet and
whisk well until smooth. Then stir in the sour cream. Heat for another minute
or two until mixture has thickened and heated through. Serve immediately over
cooked egg noodles or mashed or baked potatoes.
Recipe Source: healthyfamilycookin.blogspot.com